When you decide to purchase good quality all in one solar street lamps from the China manufacturer, you must know the manufacturer meterials at least 4 aspects. 1. solar panel 2. Lamp housing 3. motion sensor 4. battery

Below I will give you some suggest how to distinguish the quality solar street lamps.

Solar panels are one of the key components of solar street lamps, which collect solar energy, convert it into electrical energy, and then store the energy in the battery to power the street light.

Because of the high photoelectric conversion efficiency of monocrystalline and polycrystalline silicon panels, they are commonly used in large solar systems that provide electricity for residential and commercial buildings, and these panels can also be used for higher power solar streetlights. Amorphous silicon (thin film) solar panels are the least efficient, 10% or less, and are primarily used to charge low-power electronic devices. This type of solar panel is also cheaper.

In short, if you only want to use a low-power solar light to illuminate your front door or yard, you don’t have to worry too much about which type of solar panel is used on the lamp. Because the dimensions of these panels are typically very small (compared to panels used to power high-power appliances), their efficiency differences are virtually insignificant. 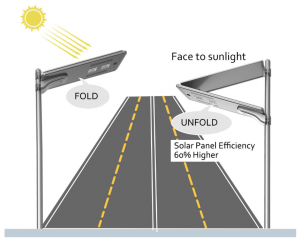 size. As mentioned earlier, the size of the solar panel will depend on the intensity of the light and what material the panel is made of. Single crystal/polycrystalline silicon solar panels and thin film solar panels produce the same amount of energy and require less area. Therefore, before purchasing solar lamps, you should consider not only whether there is enough sunlight during the day in the installed area, but also whether there are enough physical areas to install the solar panels (if you want to use high-power lights).

Outdoor solar street lamps must be properly water- and dust-proof, and can withstand the wind, sun and rain under any conditions throughout the year.

Light body material. The solar street lamps housing is usually made of plastic or aluminum. Most high power floodlights are aluminum enclosures to maximize protection of the lamp’s internal components from any external impact that could damage the lamp body.

However, there are also some cheaper spotlights made of plastic casing. Of course, plastic does not always mean poor quality, because most manufacturers’ lamps use a very durable ABS plastic casing (except for some bad manufacturers), which not only protects the lamp from impact and water intrusion, but also High and low temperature resistance. If you find a solar projector with a very low-priced aluminum casing, don’t think that you have found the baby, because these lamps may be poorly waterproof or the manufacturer may cut corners elsewhere.

The motion sensor is responsible for detecting motion within a certain range around the solar street lamps and turning it on when motion is detected. The three most common types of motion detectors are active sensors (which detect motion by transmitting microwaves and monitor changes in wave response time), passive infrared sensors or PIR (detecting motion by scanning infrared thermal changes in the monitored area) and combined sensors.

In fact, all solar sensors with motion sensing use PIR sensors to detect motion because they are easy to adjust and do not pick up the movement of random objects such as branches or wind blowers that are common outdoors.

The range and distance settings determine the angle at which motion can be detected. Most motion sensors allow motion to be detected at 180 degrees around the sensor, while some special sensors can even detect 360 degree angle motion. The distance allows the adjustment detector to receive the distance of motion.

The delay or detection time setting determines the amount of time that illumination will illuminate after motion is detected. The light sensitivity setting determines the brightness required for the sensor to begin picking up motion. Most motion sensing (or radar-sensing solar projectors can capture motion at 120-180 degrees wide angle and approximately 8-10M long distances).

As the cost of lithium phosphate batteries continues to decline, the use of lead-acid batteries in solar lamps is also decreasing. (About the battery, I will write an article later to introduce.)
capacity.

The capacity of the rechargeable battery shows the maximum energy that can be stored in the battery, measured in ampere-hours (Ah) or milliampere-hours (mAh). In general, the larger the capacity of the battery, the longer it lasts. On average, nickel-cadmium batteries have the smallest solar cell capacity of about 600 mAh, followed by 2000 mAh nickel-metal hydride batteries. Lithium-ion batteries have a wide range of solar lamps ranging from 2000 mAh to 6000 mAh.

The capacity of the battery alone can’t tell you how long a solar light can be bright (brightness, solar panel wattage, motion sensor and other factors are also important), but it gives you a deeper understanding of the overall quality of the lamp. If you see a high-power solar street lamps, it is equipped with a small capacity (less than 2000 mAh) Ni-MH battery or lithium-ion battery, it is best to look at other manufacturers’ products, because this configuration is not May store enough charge during the day to provide overnight lighting

In order to increase the duration of the illumination, the solar light is equipped with a motion sensor that turns on the light at a given time interval (usually within a few seconds) and turns off the light after a preset time when motion is detected in front of the light. This helps save energy and provides continuous illumination.

Well, the above is a few aspects that need to be paid attention to when choosing a solar light. Due to the limitation of time and space, many details can’t be clearly explained one by one. Later, I will continue to issue a text explanation. Everyone remembers to keep paying attention!

All in One Solar street lights install
Scroll to top